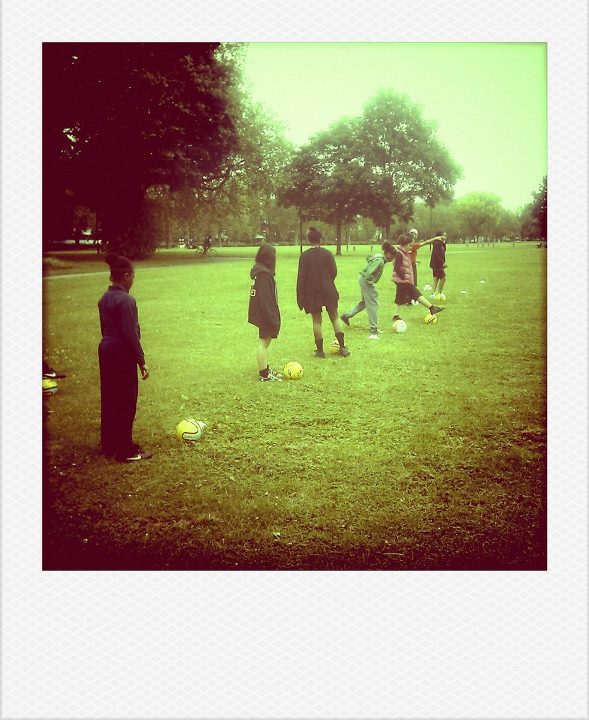 It has been exactly a year since I was given an Unltd level 1 Award to set up the project now known as Hackney Laces. And a good year it has been.

What began as me and 7 girls on rainy November nights has now turned into ‘we’ and a small army of players. In the words of one of the girls, “we’re a real life football (and community) club.”

49: girls who have signed the register

8: Number of the girls who go to Highbury Grove but don’t have a school team to play for

5:  The average number of miles that the girls travel to come to training (we mapped where everyone lived to see if there was a more logical place to set up shop. Petchey is actually a good fit for most of the players)

4:  balls remaining from the original 10 we started with (if you recall I wrote in a preview post about managing to not lose any kit).

3: The number of professional female footballers we’ve had drop by to meet and train with the girls (1 Brazilian, 1 British and 1 Indian)

2: girls who have only missed 2 sessions – ever! (Nicely done Lauryn and Rhian)

2: The number of Spectators we had at our very first (and only) match

This is hard to articulate. The whole experience has been a steep learning curve. Here are a few that I think are worth mentioning:

1. The best way to recruit teenaged girls is actually through them. The small but strong group of 7 girls I had from the beginning enjoyed coming so much that they started bringing their sisters, aunties, friends and cousins. This turned competitive where the girls would challenge each other to see who could bring the most new recruits each week. We still advertised locally and online for new girls, but the biggest boost in numbers came from the girls themselves wanting to  grow the team.

2. There *really* needs to be more things for young people to do. We get girls coming along that hate football but they just want a place to hang out. Some girls just sit and watch, others play and some come, sit on the side line and eat their dinner. Any activity we’ve thrown at the team, from summer residentials to tutoring to watching a live football match, they are all game on. It’s amazing.

3. More people should do things that they love. I love football and the laces lot. And if you ask the other women involved they’ll tell you something very similar.

Our honour role is rather large so for now we’d like to say thank you to a few good apples.

September will be a busy month for us as school goes back in and we get more girls out. We have a few fundraisers lined up, a football course that the older girls will be going on and more matches.

Our to do list is always increasing, but let’s be honest, that’s a good thing.

And of course, if you’d like to get involved, please do get in touch! Email hello [at] hackneylaces [dot] co [dot] uk.

2 replies on “Hackney Laces One Year On”

Congratulations to everyone who embraced the vision and work towards the dream! Well done!!