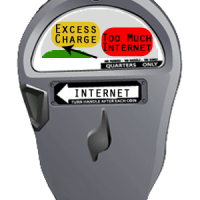 As a person who a) plans to return to Canada in the not so distant future and b) has spent the past 4 years working in the internet realm this whole “Metered Internet Use” legislation being thrown around in Canada is pretty scary.

The Canadian Radio-television and Telecommunications Commission (CRTC) has passed a ruling that allows large incumbent Internet service providers (ISPs) to force usage-based billing onto their independent competitors and the Canadian public. Basically, it’s allowing three companies (Bell, Rogers and Shaw) to control the market, making it very difficult for independent ISP to survive, and thus controlling how Canadians can use the internet.

By imposing a pay-for-use basis on smaller ISPs, this is not using internet technology as an enabler, but rather an oppressor and excluder. Those which can’t afford regular access, or rely on connectedness to places beyond their own physical community and many others quality of life will not improve should this legislation see the light of day.

This is not to mention the hindrance this would have for any web-based start-ups. It would absolutely crush innovation and I never thought I’d say such a thing, but Canada should take a cue from the States. Look at the wealth, opportunity and entrepreneurship that has flourished in the States from Silicon Valley. Similarly, here in London, East London Tech City is being developed as the British version of Silicon Valley, where high concentrations of tech start-ups congregate and will reap the benefits of ultra fast broadbrand connectivity by a variety of ISPs as initiated by the UK government.

More and more people are using the internet for creating social value and for sharing information in different and new ways. Some schools around the world have started using the internet to teach students when weather and other events prevent them from attending school. Skype, an internet based phone service has connected people with friends and family around the globe. Why on earth would Canada let a distorted telecommunication market control its citizens ability to use the internet by making it unaffordable?

By letting larger companies control and set exceptionally high rates for internet usage (Canada has the highest monthly charge for access to an unbundled local loop of any OECD country*), we are smothering potential economic growth, innovation, social change and community building.

Let’s not let this be the only way. Sign the petition. Make a fuss online – while you still can.

One reply on “Stop the Meter. Please.”

Petition signed and posted to fb for others to see